Gerald R. Flurry claims to be the “only one who speaks for God.” How can you know if it’s true? Or could he merely be another false prophet that the Scriptures warn us about? Does he preach the true gospel or is it another gospel? 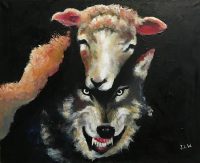 “Beware of false prophets, which come to you in sheep’s clothing,
but inwardly they are ravening wolves.” ~ Matthew 7:15

Back to Mike’s Enlightenment Page (Philadelphia Church of God Exposed)