This article details the modus operandi of the Worldwide Church of God* in dealing with its members. This is one of many such stories that have surfaced out of this organization.

(Note by ESN: This article covers the tragic story about Garnet Hill.)

Are you frustrated? Is your life in turmoil? Is your marriage a disaster? Are your finances in shambles? Are you turned off by the sham of popular religion? Are you nauseated by the phoniness that dominates today’s society? Are you seeking for answers? Are you now ready to get yourself involved in truly purposeful and worthwhile endeavor?

If your answer is, Yes, look out! You’re in dangerous territory. Your immediate decisions and actions could be extremely hazardous to your wealth, not to mention your future spiritual well-being.

You are a prime candidate for suckerdom!

If you presently find yourself in the position described above (and don’t we all at one time or another in our lives?), you may possibly find yourself attracted to the television program that is presently at the top of the religious program charts: I refer to The World Tomorrow program.

Watch out! It could be a fatal attraction!

It is easy to see why this slick, well produced program would attract the attention of many people who are concerned about the present state of our nation, The World Tomorrow appears to offer solutions to the great questions of the day. If you call (toll free, of course) the sponsors or the program, the Worldwide Church of God (WCG) headquartered at Ambassador College, in Pasadena, California, they will graciously send you a free subscription to their monthly publication, The Plain Truth magazine. Upon request, they will also send you (“free” of course) vast collection of glossy publication on a multitude of religious and other topics, topics that will stimulate your mental processes and encourage you to seek the “answers” that are presently lacking in you life.

These “answers,” naturally, are only available from one source–“God’s one true church,” which conveniently happens to be the Worldwide Church of God.

CO-WORKERS AND THE “GREAT COMMISSION”

Many recipients of this “free” material, impressed by its quality and apparent truthfulness, begin to feel guilty for not having paid for it.

They decide to “help out” by sending in a check. By return they receive a letter of thanks addressing them as “co-worker’s in THE Great Work of God.” If they continue to contribute money, they receive lengthy “co-worker letters” extolling the alleged virtues of “the Work” and telling of the grandiose plans being implemented to “spread the gospel” still further afield.

With each passing “co-worker letter” it is heavily implied that the Great Creator God of Heaven and Earth has Personally led you into direct contact with His “one true church.” You should now “obviously” want to join the “select of the elect” (WCG), attend church services, and play your God ordained part in the fulfillment of the “great commission.” Obviously! The ploy is subtle. It’s very attractive, It appeals to the ego. It seems to be logical and make sense, gives you a sense of “worth,” Who, after all, would be spiritually dumb enough to turn down the Creator’s direct and Personal invitation to become one of His “elect” and have “a part in His great end time Work”? Few indeed!
After all, who wishes to commit spiritual suicide?

Stop! There’s more. As an added bonus, you are personally guaranteed that, in “the glorious and wonderful World Tomorrow,” you PERSONALLY will have a direct part in straightening out this sin sick world. Who could ask for anything more?
Heady stuff, this exclusivist religion!

Let’s face it! There is a great emptiness–a yawning void–in the hearts and lives of most people. This vacuum cries out to be filled!

But there is a problem! Most people have little interest in being free and independent. Such a prospect frightens them! Most have a burning desire to “belong,” to be part of the “in” crowd, to be where the “action” is. They want to hitch heir wagon to a “cause,” or to a religious or political guru–a leader who will at least lend a sense of purpose to their otherwise miserable existence. As a result, many are ripe to become “true believers” in a political or religious cause!

THE CHURCH WAS THEIR LIFE

Mr. Garnet Hill of Miami, Florida, was one such true believer. In the early 1950s and nearing retirement, Garnet and his wife happened to stumble across The World Tomorrow radio program. They were impressed. It seemed to be what they were looking for. They responded, and were later baptized into the Radio Church of God (later to become the Worldwide Church of God).

From the beginning the Hills were totally identified with its alleged purposes and goals. The church was their life!

Like all “good” church members, the aging Garnet Hill and his wife gave at least ten percent of their meager income’ to Worldwide Church of God. Every third year they gave an additional ten percent to the church for the sustenance of the widows and others in dire need, In addition to this horrendous financial burden, the Hills (like all “good” church members) repeatedly gave sacrificially as instructed by their new guru, “God’s one true apostle,” Herbert W. Armstrong. He always said the money was “desperately needed” to do “God’s Work.”

In 1970, Garnet Hill (then in his late seventies and with his wife ill with cancer) responded in his usual whole-hearted manner to yet another of Armstrong’s urgent pleas for more money to keep “the Work of God” moving ahead.

In additional to his home, Hill owned six plots of land in Hollywood, Florida, valued at $35,000. In his zeal to comply with Armstrong’s relentless demands, Hill decided to sell the land and give the lion’s share of the proceeds to “the Work.”

The sale of the six plots was left in the hands of Armstrong’s local representative, Brent Curtis, and his assistants. Later, Hill was told that the sale realized $30,000, or $5,000 less than the land’s assessed value. Of this, Hill gave $20,000 to “the work.” He asked for $10,000 for himself, so that he could meet any emergencies that might arise in his old age.

When, after a number of months, he had failed to receive a receipt for his generous donation Hill began to ask Curtis and Armstrong’s other agents in the Miami area for an explanation. Although his queries went unanswered, Hill was accused of being a trouble maker. He was told to “be patient.” He was also told he needed to “repent” of his “bad attitude.”

Hill was then ordered to “keep quiet” about the apparent theft of his $20,000. His reply was that it would be “a sin to cover up sin.”

Four years later, Hill decided to follow Christ’s admonition in Matthew 18:15-17. On February 10, 1981, in a “personal” letter to Herbert W. Armstrong, he took his $20,000 problem to “headquarters” in Pasadena, California. Hill expected, in all good faith, that the problem would be immediately corrected.

On November 9, 1973, Bob G. Seelig of the accounting department at Pasadena “headquarters” had written Mr. Hill. Seelig stated that they had “checked all (their) donation records and other sources of information (and)… there seems to be no knowledge or record here of your donation.”

Three years and three months later, on February 14, 1977, in a letter from “the legal office at God’s work,” and signed by Benton Nesmith, Hill was informed that his funds had been somehow “mis-applied.” Nesmith went on to explain that “we recently succeeded, after a protracted effort, in obtaining $5,000.00 for the church. This represents a portion of the funds from the sale of your lots which were not sent to headquarters…”

This blatant admission of deceit and fraud was followed by a request that he (Hill) send the church the deeds to his remaining property. Also enclosed was information on how to bypass probate for savings accounts. The church obviously wanted all his savings when he died!

Late in 1981, Hill, now 87, in rapidly failing health and legally blind, received a phone call from Al Kersha, Armstrong’s new head man in Miami. Kersha was angry: “You are not welcome (at services). I am putting you out of the church for talking about it” (the theft). Hill later told friends that Kersha then slammed down the phone with such violence that it hurt his (Hill’s) ear.

Garnet Hill was devastated by his excommunication from Worldwide Church of God. He now found himself alone, with no family or friends. His former “brethren in Christ’ were forbidden to speak with him, for fear of being contaminated by his “sin.”

A few lay members in the Miami Worldwide Church of God congregation tried to give Hill moral support, phone calls etc. but feared to do more for him lest they, too, be excommunicated [disfellowshipped] on orders from the Pasadena Pope.

The Armstrong cult has a diabolical grip on its adherents.

NO MERCY AND COMPASSION

During the months following his excommunication Hill, broken, disillusioned, emotionally destitute, and now legally blind, cried out for help. Only one Worldwide Church of God deacon had the courage of his spiritual convictions. He heard Garnet Hill’s cry, and helped him.

It would, perhaps, be logical to assume that “God’s true church” would respond, as Jesus did on similar occasions, with mercy and compassion. Wrong again! Mr. Hill’s personal letter to “God’s one true apostle,” Herbert W. Armstrong, protesting his excommunication was treated with the same contempt that has consistently characterized the cult that has become known an ‘The Worldly Church of God.”

Mr. Hill’s “personal” letter to Armstrong was answered by Joseph Tkach, an Armstrong assistant, on April 9, 1981. Tkach fully approved of the cult’s mistreatment of Hill.

Shortly thereafter, 89-year-old Garnet Hill died. He was just one hideous example of the awesome human wreckage strewn in the wake of Herbert W. Armstrong in his diabolical lust for fame, fortune and raw power. There are tens of thousands more!

A few days prior to his death, Garnet Hill received his final letter from “God’s one true church.” No, the letter didn’t inquire about Mr. Hill’s health and spiritual well-being. No, it didn’t offer him spiritual or financial assistance. It asked if Worldwide Church of God was still named in his Will. Nuff said!

And the moral of this true story? Beware ‘Ambassadors’ bearing gifts. The life you save may be your own! 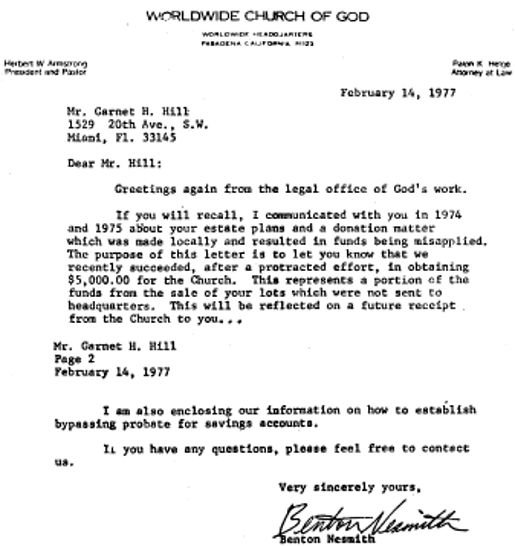 *Worldwide Church of God changed their name in April 2009 in the United States to Grace Communion International.

Recommended book: Armstrongism: Religion or Rip-Off? (An Exposé of the Armstrong Modus Operandi) by Marion J. McNair (chapters 2 and 3 give an analysis of Herbert Armstrong’s co-worker letters, revealing the propaganda methods he used in order to solicit donors and then con them out of thousands of dollars.)

Related Article: Dropouts See Hucksterism Where They Once Saw God (Newspaper testimony from those exploited by WCG. Those who read this article will notice carry-overs with certain totalistic WCG offshoots, such as Philadelphia Church of God, Restored Church of God, Living Church of God, etc.)

Back to Worldwide Church of God Expose` (many articles)