Children are important to God. Can they at a very young age understand the Gospel and come to know Jesus? This article will undoubtedly bring to mind the cruelty and lack of concern that Worldwide Church of God and controlling offshoots (i.e., Philadelphia Church of God, Restored Church of God, etc.) have shown to the children. A prime concern of false teachers is how they can control their youth and later recruit them into their exclusive organization. However, let us not forget to show our children the real Jesus and the love He has for them.

I have always enjoyed reading about Charles Spurgeon1 and his life, ministry and works. Though fearless and eloquent in the pulpit, outspoken in controversy, he was always a companion and playmate of little children. He used to say that there should be something in every service, and indeed in every sermon, for the children. Many a child came to Christ through the simple, yet doctrinally profound preaching of Spurgeon.

In my reading, I found it very interesting that in his day, in London, whenever a pulpit committee considered a pastor for their church, they would include the question, “Is he a children’s man?” Now, isn’t that something! They wanted pastors who loved children!

Spurgeon’s ministry actually began among the children as he was given a small Sunday school class to teach. The story goes he reached so many children, who took his teachings home, that parents started to come to hear him, and that is how his ministry as a young preacher began!

One of the very first outreach ministries of the church Spurgeon pastored was to begin an orphanage for the children. Throughout the years more orphanages were started where hundreds of boys and girls were cared for over the years. It is said that the orphanage children were the only choir that Spurgeon’s Metropolitan Tabernacle had, and he would constantly look at their happy faces in the gallery as they sang the Savior’s praises.

One of Spurgeon’s contemporaries used to say that he liked to make children happy when he was preaching for he knew how miserable they would be when they grew up! It has been estimated that Spurgeon gave away as many pennies–candy too–as there were children in the orphanage on each visit, and that when he died every child who had passed through the orphanage had shaken hands with the Founder.

When illness kept him away from the orphanage, he always wrote the children a letter, especially at Christmas2, when they were ill, or when there was bereavement. Surgeon’s finest prayer is said to be the one he prayed with an orphanage boy whom he held in his arms as he was dying.

Our Lord Never Forgot the Children

Don’t forget the children. Spurgeon never forgot them and, certainly, our Lord never forgot them. Of all the pictures of Christ and His care for people in the Scriptures, the one most beautiful to me is our Lord with a child on His lap. My, how he loved children.

I once recall seeing Dr. Howard Sugden, beloved pastor for many years of South Baptist Church in Lansing (MI), on bended knee, at eye level, talking to a child. What a precious sight.

I have been in a couple morning services in our churches where there was a segment called, “Pastor’s Pals,” in which all the children would be gathered on the platform around the pastor where he would give a brief condensed form of his sermon, on their level. It is said that adults received more out of that homily than the actual sermon!

In one of my pastorates we had a large number of boys and girls in children’s church and in order for me to enter the sanctuary to preach I had to go through their meeting room. Every Sunday morning as I entered the pulpit, I was greeted with the cheerful sound, “Good morning, Pastor Belt, we are praying for you!” Believe me, that did much more for my preaching than did the oblivious faces of the congregation!

Can Children  Understand the Gospel?

And can children understand the gospel? They certainly seemed to in Spurgeon’s day!

I recall one service in which I closed in praying the sinner’s prayer for any who might be in need and desire of God’s glorious salvation. A few weeks later one of our families was talking to their little daughter, no more than five or six in age, about trusting Christ as her Savior. She said, “Oh, I did that. It was after Pastor Belt’s message when he asked if any would like to ask Jesus into their heart, to pray this prayer, and I did!”

Spurgeon said that, “Those children who are of sufficient years to sin and be saved by faith have to listen to the gospel and receive it by faith. And they can do this, God the Holy Spirit helping them. I will not say at what age children are first capable of receiving the knowledge of Christ, but it is much earlier than some fancy.”

Don’t forget the children! Put something in every sermon “just” for them. Take a moment, on bended knee, at eye level, to ask them how are they doing today and do they love Jesus? Seek their salvation early before they are distracted by all the cares of the world. Praise God that Polycarp3 was saved at age nine; Matthew Henry4 at eleven; Isaac Watts5 at nine; W. A. Criswell6 at ten, and the list goes on. Praise God that someone cared to share with them the claims of Christ.

D. L. Moody7 was once asked, “how many were saved tonight in that meeting?”

When Moody said, two and a half, the man said, “Oh, two adults and a child?”

“No,” said Moody, “It was two children and an adult. The children have their whole lives to live for Christ, while the adult has come with half of his life.” 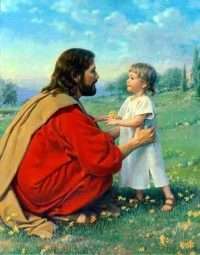 I Was Able to Compare S.E.P. Camp to a True Christian Camp

1 C. H. Spurgeon (1834-1892), British preacher. He was converted to Christ at age 15 and by age 21 was London’s most popular preacher. There is more material in print by him than by any other Christian author, alive or dead.

2 While Spurgeon stated in a sermon on Dec. 24, 1871 that he did not believe in the “present ecclesiastical arrangement of Christmas,” especially “the mass,” and did not find any “scriptural warrant whatever for observing any day as the birthday of the Saviour,” he still used that time of year–as he did all others–to preach Jesus Christ and to give God thanks for His Son.

4 Matthew Henry (1662-1714), a non-conformist English minister and commentator. He is most remembered for his multi-volume exposition of the Old and New Testaments which is still published.

6 W. A. Criswell (1909-2002), an American pastor. He became the spiritual father of the stand against liberalism among Southern Baptists. He wrote, “Why I Preach the Bible Is Literally True.”

7 D. L. Moody (1837–1899). Within a 40-year period he won one million souls, founded three Christian schools, and inspired literally thousands of preachers. He refused to become involved in any theological debates that might detract from his evangelistic work.