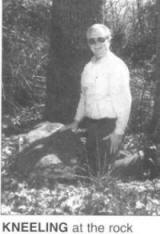 News he tells about obtaining this rock that Herbert W. Armstrong prayed beside and how he having it brought from Oregon to Edmund, OK to display it on his Imperial College1 campus. According to Flurry, this is “the most inspiring story on earth.” Where did this story come from and why is Flurry moving this so-called important rock to his headquarters?

The story of this rock begins and ends in one paragraph in Herbert Armstrong’s autobiography2 where he tells the story of how he was a guest at the farm home of Mr. and Mrs. Elmer E. Fischer and while exercising on the hilltop he discovered a rock “about 14 inches high,” where he prayed for the success of the new campaign meeting west of Eugene, Oregon. This rock was evidently the right height for him to kneel beside and so HWA said it became his “prayer rock.” He goes on to say that he is sure that he “drank in much energy, spiritual strength and inspiration at that prayer rock.”

David Todd, a minister in Philadelphia Church of God, was so “intrigued” by this history that he started searching for the sites HWA described and ending up finding the Fisher farm and the rock quarry behind the hill. Since he was told by relatives of Elmer Fisher that “nothing on the hill had changed in 70 years” the rock had to still be there. Todd took several others from PCG on an expedition to search for “the rock.” Well, it turns out that on the entire hill, only one rock “fit every detail” that HWA had given in his autobiography. The details given were “14 inches high.” When Flurry was later shown the rock he believed it had to be HWA’s “prayer rock.”

This same article goes on to tell how peaceful and quiet the entire area was, how soft the ground was, how lush and soft the moss on the rock was, how “very comfortable” the rock was to kneel beside, and how one could just “spend hours” at that location.

The rock was kept quiet until Flurry could view the site two years later and do some filming. But when he discovered that someone else was interested in the sites, including this prayer rock, Flurry wanted to move as quickly as possible to obtain the rock. Through court records they found out who the property belonged to and then let the new owners know that PCG would like to have the rock as “a memorial” on their campus. There was no problem in obtaining it and they didn’t even have to pay for it. The owners did, however, sign a document affirming that they donated the rock to Philadelphia Church of God.

The article goes on to describe how they pulled the rock under the fence and loaded it onto a hand truck and then into the van and brought it to Salem. Todd has the rock at the present time and is awaiting to move it to Edmond in the next few months.

Flurry is not quite sure what he is going to do with the rock after it arrives. Will members come and pray before it? Will some spend hours beside it? Will Flurry carve HWA’s name on it? Actually, Flurry indicates displaying a plaque on it that will tell what HWA wrote about this rock (in the one paragraph in his autobiography). Oh yes, they are planning on keeping the moss alive that covers the rock.

To justify moving this rock to PCG’s campus, Todd says that there were rocks in the Old Testament that were 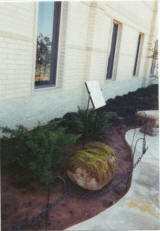 important; e.g., Jacob’s pillar stone and the twelve stones that Joshua set up after Israel crossed the Jordan. However, the Bible shows that these memorials were set up to recall divine visitations so that others might learn about God when they would ask, “What mean ye by these stones?” (Josh. 4:6) Did Herbert Armstrong have a visitation with God at his prayer rock?

What are members going to be persuaded to do with this rock? Could it become a form of idolatry? Flurry says that the rock belongs on the Imperial Campus because it will be a memorial showing “the importance of prayer, and the need to continually look to the spiritual Rock, Jesus Christ.” Why not just look to the true Rock, Jesus Christ, who is the reality today; instead of to a boulder that he is dragging all the way from Oregon?

Needless to say, PCG members are being stirred up with excitement and awe concerning this rock, which is supposed to be the same one that has lain there since 1933 and has never wore down by the rain or elements. This is sadly nothing but another deception of Gerald Flurry to influence his followers to draw even closer to feeling God is working with him alone. Flurry will undoubtedly succeed in deluding many of his members into feeling they really are in God’s “one true church” and that this really is HWA’s “prayer rock.”

I hope others will see through this idolatrous and foolish hoax and how this has nothing whatsoever to do with the things that are truly important to God. The discerning will see this as the last straw of Flurry’s follies and will leave the PCG. They will have made a very wise choice.

Update: This so-called “prayer rock” of Herbert W. Armstrong’s finally arrived on PCG’s college campus on August 15, 2002, after being retrieved from Oregon by a woman member and her son who traveled 4,900 miles round trip to fetch it. This woman called this trip “one of the most inspiring experiences of her life.” It is truly sad to see the lengths the members will go to in order to hold onto the belief that they are in the “one true Church” with the “one true gospel” for these last days. Instead of their time being used to learn more about the true Jesus Christ of the Bible and what He has done for them, they have given their life over to the teachings of Gerald Flurry. If they start uncovering facts about the PCG and dare to ask Gerald Flurry some pertinent questions, they are disfellowshipped and shunned.

Back to Articles on Gerald Flurry