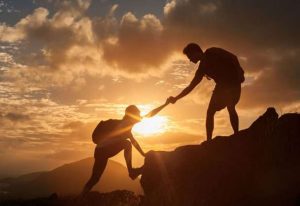 Those involved in an abusive group become enmeshed in the government of that organization. These groups use varied forms of thought reform, manipulation, coercion, deception, peer pressure, guilt, fear, phobias and threat tactics which lead members to absolute obedience and non-questioning. Deceptive ministers distort the Bible (heavily using the Old Testament Law) to enhance their control on the unsuspecting and vulnerable. Due to the implementation of these deceitful tactics, recruits often suffer a loss of identity, will, and the ability to think critically. Members may no longer control their own life due to the reasons mentioned above; instead, following the loss of their critical thinking skills, they surrender their life to the authority and direction of the authoritarian leader.

Upon exiting, the survivor may struggle with many recovery concerns trying to repair themselves from the damage and personal loss due to spiritual, emotional, financial and often physical abuse. The control of information, propaganda tactics and secrecy causes critical thinking skills to cease which creates conformity. They may suffer from a loss of will and hope, along with inferiority, shame and guilt. The group leaves exiters’ thinking skills impaired and the decision-making abilities dormant. Dependency on the group is fostered. Disassociation replaces interpersonal skills. These are just a few of the ramifications from cultic involvement.

Many survivors of an exploitive, totalistic group experience to some degree emotional trauma in the form of phobias, guilt, low self-worth, deep depressions, complex post traumatic stress, inability to concentrate, anger and fear. They also can experience “floating,” also known as trancing out and dissociation. Floating inhibits recovery from the devastating experience. On top of all that, the survivor must get reincorporated into the “real world.” For many this can be life-threatening.

The implications resulting from involvement can be devastating. Totalistic, abusive groups can cause tremendous trauma, which is considered the deepest emotional pain felt. The feelings are analogous to being incested or raped. Individual lives may be shattered; however, these effects do not need to continue throughout life. A member had no choice when recruited, but does have a choice in the healing process.

Healing and recovery begins when you make a personal decision to take back your life by verbalizing the emotional, physical, spiritual, financial, and all too often, sexual abuse inflicted on you. This is easier said than done to regain your voice, but is possible to accomplish.

Each survivor has the opportunity to sort out the past and find the answers to his/her questions that will allow healing from the emotional trauma and complex post-traumatic stress. The traumas are caused from the deception, coercion, manipulation, guilt, fear, abuse and the array of mind control techniques which prevailed through the organization.

Many who do not challenge what they were in, and who do not confront the denial, often find themselves in another deceptive, mind-manipulating group, or floundering.

If you have been victimized by being disfellowshipped or abused in any way, don’t keep the pain to yourself. You are not alone. Survivors do not have to succumb to the control and fear tactics that once permeated their life. You are now free–to think, question, make your own choices, and speak up. Please feel free to tell your personal story. Get connected to people who have been there and can relate to your situation.

Recovery consists of breaking down every facet of manipulation and building a solid foundation on truth. It takes time and must be complete in order to resume a functioning and positive life. It encompasses the following:

Exiters often have times when they feel like going back into the group. That is one reason why it is recommended that they stay away from any literature that the group puts out. They may feel the “high” of the group, or may wonder if they were wrong for leaving and question if the group might have been “the true church” after all. This is called “floating” and it is important to try and pinpoint what triggered the episode and to recognize any loaded language involved. The trigger could be visual, verbal, physical, etc. Cognitive focusing is helpful at this time.

Go to Part two: Emotional and Spiritual Healing (Covers and talks about the many after-effects and how to deal with them.)

Questions About Recovery (From our Q&A)

Prayers For Freedom From Spiritual Strongholds
Very effective in gaining liberation from strongholds and oppression due to involvement in any harmful, abusive group or occult practices.